A vessel found drifting on the southwestern side of Cades Bay has aroused the suspicion of the Defence Force Coast Guard, and the Police are now investigating the discovery.

Reports say the boat was discovered at about 7:15 p.m. on Tuesday, May 10, in an area that is about four and a half miles southwest of Cades Reef.

Reportedly there was a strong smell emanating from the vessel.  This prompted the Coast Guard to tow it back to the base at Deep Water Harbour and hand the matter over to the Criminal Investigations Department (CID).

Lieutenant Randolph Bess is said to have made the report, and CID officers proceeded to the Coast Guard base to conduct inquiries.

Reports say the boat is blue and black; about 25 feet long, eight feet in width; and about 10 feet high.  When it was examined, the officers found debris – consisting of food items, clothing and plastic bottles –

floating in about a foot of water in the bottom of the boat.

A foul smell emanating from the vessel is said to have been overwhelming, but no one could be seen on board.

According to a source, the vessel bears no name or marks that indicate its country of origin, and lawmen are expected to conduct a further examination of the vessel today, May 11.

Last year, a similarly abandoned vessel was found in Antigua’s northeastern waters and was towed into Parham Harbour.

Speculation was that the occupants were refugees who had died at sea. 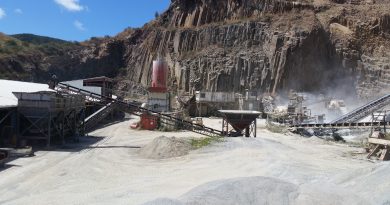