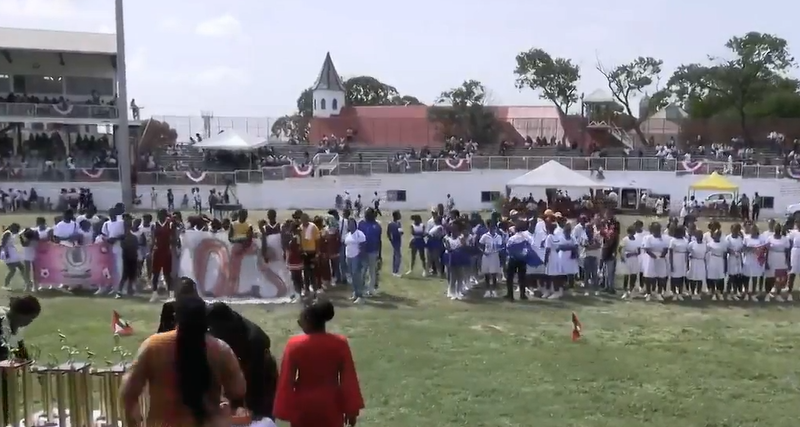 “We want water!” That was the chant of some students and the complaint of both teachers and parents today, as the National Youth Rally was underway in St. John’s today, October 27.

One woman who attended the event to support her grandson tells REAL News she is outraged that, in hot, humid weather like this, the children were made to drill through the streets with no water provided by the Ministry of Education or the Festivals Office.

“Imagine this [nonsense]! Gaston giving away money [down Point] and now it’s Independence, no water for pickynearga who a march! For crying out loud!” she declares.

A teacher also contacted our Newsroom to lay out the entire route, street by street, covered by the children. “And no water for them in that hot sun! Nobody was even on the route to hand out some water for them as they passed!” she complains.

When they returned to their base, she says, the exhausted primary-schoolers’ refreshment consisted of “a small bottle of water, a boxed juice, and some dry fried chicken. After all that!”

The teacher says she was particularly upset that – in addition to the customary “eyes right” to the Governor-General, Sir Rodney Williams – the children were made to acknowledge former Education Minister Michael Browne, whom she described as “totally undeserving.”

She also took umbrage that, while Sir Rodney stood, without a hat, in the searing sun, to take the salute, Browne remained comfortably accommodated under a tent.

Many persons are saying that, after 40 years, it is more than time that students representing their schools in this annual exercise are treated better. They believe that tents should be provided to shelter them from the heat and a proper snack or meal should follow the march.

On another note, aspects of cheerleaders’ routines were met with disapproval by some adults, who felt that certain “Carnival” moves and gyrations were not appropriate for children nor suited to the occasion.