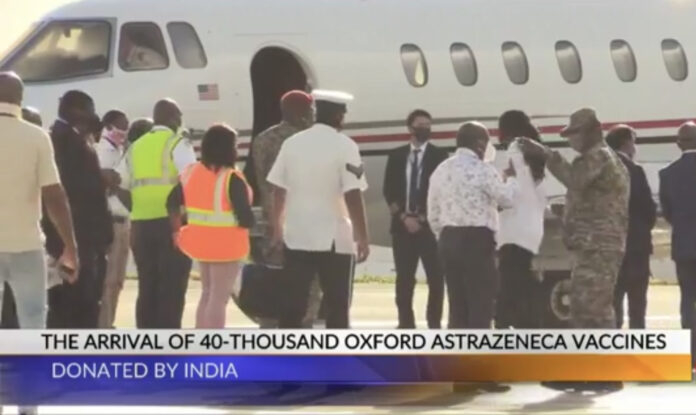 Health Minister Molwyn Joseph is encouraging citizens and residents to avail themselves of the COVID-19 vaccine as the public inoculation programme rolled out today, March 1.

Joseph spoke this morning at the V.C. Bird International Airport, during a brief ceremony that followed the delivery of AstraZeneca vaccines from India, and said he is happy with the roll-out to date.

Ministry of Health officials are reporting that hundreds of people availed themselves of the vaccine today at the four designated locations, and Joseph says he had an opportunity to witness the process first-hand as he visited the various sites to ensure there was a smooth flow of operations.

He says that the 35,000 vaccines received from India will allow a significant percentage of the population to be inoculated.

Joseph says that four locations will be utilized for the vaccination program, including the Multipurpose Cultural and Exhibition Centre.

The Health Minister reportedly led a team of senior technicians on a series of site visits between last Friday and Sunday February to ensure their readiness for Monday’s public roll out.

Prime Minister Gaston Browne, who was present for the vaccines’ arrival, also encouraged the public to take part in the drive and stem the spread of the virus.

Browne says the Government is trying vigorously to source other drugs in order to vaccinate at least 80,000 persons and achieve herd immunity.

Officials say that, starting Tuesday, March 2, all four vaccination sites will open from 9 a.m. to 3:30 p.m. daily. Those taking part in the program will be required to present identification cards.

Meanwhile, arrangements reportedly have been made for a mobile unit to be utilized to service shut-ins and those who are physically unable to visit any of the vaccination sites.

Additionally, special arrangements have been made for all government workers, including those in statutory organizations, to receive their COVID-19 vaccinations on the job, starting on Tuesday.

Special provisions have also been put in place for the vaccination of teachers through the Ministry of Education.

Police continue investigations into various reports of sexual assault, but have charged a 35-year-old with six counts of rape